When I was printing 24/7 for about 5 years I never had a problem with filament absorbing moisture because the heat from the machines kept the rooms they were in hot and dry and the filament was stored in the same rooms as the printers. In fact in winter it was so dry I had to buy a long conductive ESD mat that runs the length of my workshop and wear ESD ankle straps to prevent getting sparks off everything I touched.

Since I retired I print more sporadically and tend to go away in winter and leave the heating at only 12°C. I still didn't have a problem with the white ABS that I got from Germany for kit production. It was unusual in that its natural colour was white instead of cream and it didn't smell much while printing. I used to find that I might get one or two bubbles in the skirt round the object but after that the rest of the print was fine. It appeared that filament sitting in the extruder from the last print would absorb some moisture over time but the rest on the spool that hadn't been melted did not, no matter how long it was left.

I also got some black ABS from the same German company and that is totally different. It bubbles very badly and needs to be dried. It also smells like ABS when it is printed. I never got good results from printing it, so I put off using it for years until I ran out of white. I then decided to tackle the moisture problem. Inspired by RichRap's heated dry box, I designed a parametric heated dry box that I could tailor to fit any size spool.

When I made the Dibond version of Mendel90 I noticed the dummy load resistors for the ATX PSU ran a lot cooler than they did on the MDF version. I came to realise that Dibond makes quite a good heat spreader even though the aluminium layers are only 0.3mm thick. 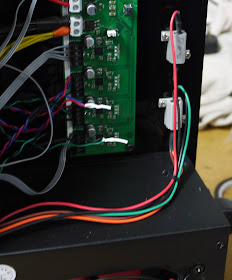 I also had lots of 47 Ω 50W TO220 resistors from various heated bed iterations that didn't go too well. Since this doesn't need to get very hot or need much power I thought it would be a good way to use them up.

I have a parametric box in NopSCADlib that is made from Dibond panels and printed brackets that can be scaled to any size that fits my CNC mill, so it was easy to wrap that around my large 2.4kg spools and add 12 resistors along three sides. The spool runs on 608 ball bearings between penny washers, there is a thermistor to monitor the temperature and a small fan to stir the air around. 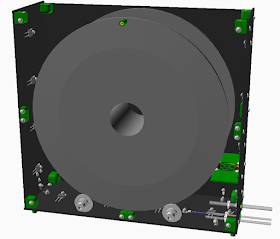 I ran the resistors in series from half rectified mains to give a total wattage of 51W. I earthed all the panels and covered all the connections with heat shrink sleeving but it wouldn't pass any safety standards as the wiring isn't double insulated. Safe enough for me though as I don't need to put my hands inside it but I wouldn't recommend it.

For my smaller 1kg spools I use 9 resistors and wire them in parallel for 12V operation. That gives 28W, which is enough for the reduced surface area and much safer. 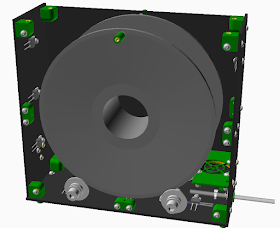 To reduce the energy consumption I obviously needed to insulate the outside of the box, so I suspended it inside another slightly larger box and filled the gap with cotton wool. It is a lot nicer to work with than fiberglass or rockwool and quite cheap in the quantities needed. It is also just the right thickness to fill the gap, which is dictated by the corner fixing blocks. Even without the cotton wool the air gap gave quite good insulation. The only connection between the inner and outer cases is a few printed standoffs and the wires and filament exit guide. 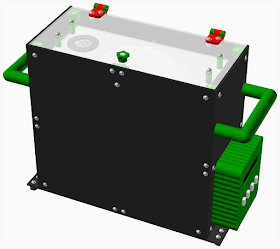 It is completed by a hinged double door made of acrylic sheets with a hygrometer and thermometer module in the inner door. An arduino Leonardo with an LCD, some buttons and a couple of MOSFETs controls the temperature and the fan and keeps a record of the heater duty cycle. Again parts I had to use up.

So basically I created a 3D printed fan oven!

The base of the outer box is extended, so it bridges the frame stays of my Mendel90s after removing the spool holders. Four fixing blocks stop it sliding off but are only screwed to the base, not the printer., so it can be lifted off and they then act as feet. 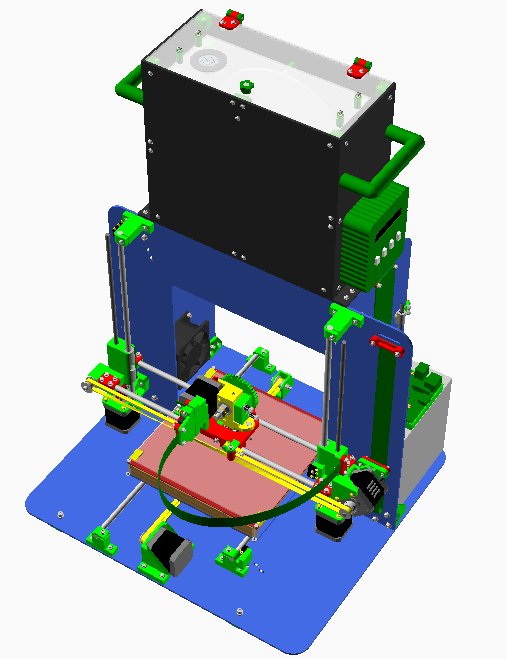 The mains version is controlled by a stand alone Arduino thermostat I had previously built to control a beer fridge. Another reason the first version was mains operated. 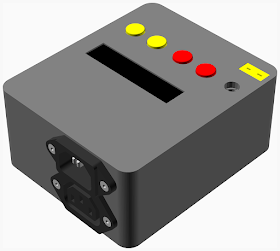 I have parts to make a third one the same as the second, after that I will probably make it headless with an ESP8266 and an I2C temperature and humidity sensor.

As well as stopping bubbles it improves surface finish making it more glossy, makes bridges pull tighter, completely stops nozzle ooze at the end of a print and even reduces the ABS smell while printing to almost nothing.

At the end of a print I retract an extra 1mm and turn off the heater before moving Z back to the top. Without the dryer I used to get 10 to 20mm ooze out of the nozzle as the extruder cooled down. I had always assumed this was due to gravity but it is in fact due to moisture turning to steam pushing the filament out. When it is dry the surface tension must be sufficient to stop any flow due to gravity.

I was used to snapping off the ooze before I start a build, it had become an unconscious action, but now there is nothing to remove. It will be a big advantage when I make a multi material machine as there should be no ooze from the idle extruders while another is being used.

The reduction in smell was a complete surprise. Before I dried the black ABS it seemed to smoke as it came out of the nozzle. I now realise that was water vapour and it must carry off some volatile products. It now hardly smells at all when printing but if I stick my nose in the dryer it does smell of hot plastic, even though it is only at 50°C.  I guess the moisture it has driven off carries some VOCs with it.

About a year ago I got some wood coloured ABS in the UK which was even more affected by moisture than the black, so that is when I built the second smaller dry box, around October. After drying it printed very well. I made this replacement handle for a curtain puller with it. 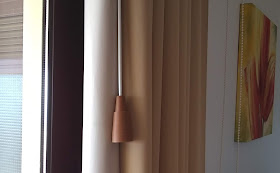 After switching the dry boxes off when we went away for the winter I turned them on again in March and they have been on ever since. I last printed with the brown plastic at the end of May and it was fine but when I tried to use it yesterday it has gone super brittle. The coil has a very strong heat set, something I don't like about 3mm filament on 1kg spools, and bending it straight now causes it to snap.

I was trying to use it on my original MDF Mendel90 that is now encased in a box with a chamber heater. The filament feeds from the top of the box rather than through a PTFE tube that runs all the way to the extruder. The part that was outside of the dry box for about seven weeks was still ductile but had moisture in it. When I pulled the dry part from the box through it just snaped, so I can no longer print it on that machine.

It does still seem to work on my Dibond machines that do have the PTFE tube all the way to the extruder. That keeps some of the coil's curve and doesn't require it to be fully straightened. 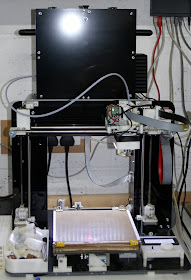 And the printed objects don't seem to be brittle at all. I haven't done any proper strength tests but a quick test bending a small 100% filled block with pliers it bent and got white bruises like ABS normally does. 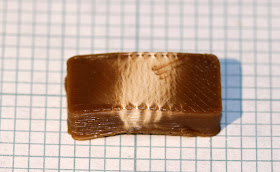 So keeping brown ABS at 50°C for a few months seems to completely denature it but a melt cycle seems to restore it. I have heard of PLA going brittle on the spool but nobody seems to know for sure what causes it. PLA is also somewhat brittle but ABS isn't at all. Presumably the long polymer chains must get shorter somehow and then reform when melted. I am not sure if the temperature is the problem or if it is too dry. I have read there is an optimum moisture level for processing plastic at, rather than as dry as possible, not sure why.

The black ABS hasn't gone brittle yet and it has been in its heated box for longer.

My prototype MDF Mendel90 runs with a chamber temperature of 45C and I have noticed that the printed parts it is made of seem to become brittle over time. The extruder runs a lot hotter of course and the Wade's block tends to crumble after a few years and needs to be replaced regularly. They last a lot longer on my unboxed machines.

I also think ABS shrinks over time, even at room temperature. I made a test print with some holes in it a four years ago when I was having an interesting discussion about Polyholes with Giles Bathgate. I tested it with plug gauges but as I didn't have a case for them I left them standing in it on a shelf near a north facing window. When I went to use them for my Horiholes test I found they were stuck in it much tighter than I remembered and the plastic has yellowed slightly. 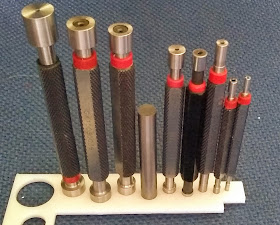 I made a case for them with a screw top using my thread utility in NopSCADlib, printed in the black ABS. 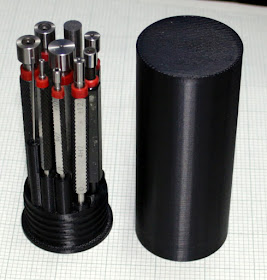 So now I have dropped the temperature of my dry boxes to 30°C as surely that won't degrade the plastic much more than in a hot room without sunlight. That vastly reduces the power consumption of course. 50°C needed about 50% duty cycle but 30°C is only 4%, only a shade over one Watt. The hygrometers are still reading 19% after a day at the lower temperature. I find that odd because, for a given air water content, reported relative humidity should increase as temperature falls.

So I think I will try initially drying new plastic at 80°C overnight and then reducing to 30°C for long term storage from now on and see how that goes. A good measure of whether it is dry enough is the complete lack of ooze at the end of the build.
nophead at 18:02