I have been using the excellent OctoPrint by Gina Häußge to control two of my Mendel90 printers with a Raspberry Pi for a while now. I prefer the convenience of using an Ethernet connection rather than USB. It means I can control a machine from any PC in the house rather than having to dedicate a laptop that had to be close to a machine. Here are the details of my set up: -

There are several places a Raspberry PI can be mounted but I chose to place it on top of the PSU so that the wiring was kept short and didn't need to pass though any of the frame elements or need any new holes drilling. I.e. all the electronics are together in one bay. 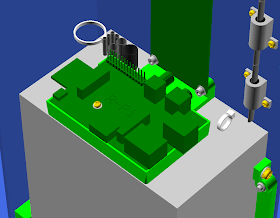 The RPI model came from https://github.com/TomHodson/Raspberry-Pi-OpenSCAD-Model

I made a tray that supports the PCB all the way round and has a couple of pillars with M2.5 nut traps to screw it down. It shares the screws with the bottom of the Melzi, replacing the spacers, which are moved to the top. 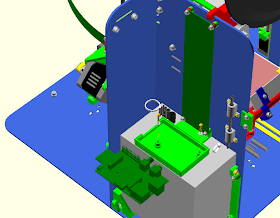 When it comes to mounting the camera there are again lots of possibilities. I contemplated something like this:http://www.shapedo.com/danielbull/raspberry_pi_camera_mount_for_the_nop_head_mendel90_3d_printer but I went for a straight on view from the back by printing a bar that spans the stays and clamps to the Dibond. 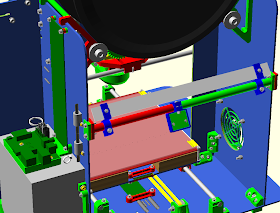 This gives a view orthogonal and centred with the bed so the only degree of freedom the camera needs is vertical tilt. 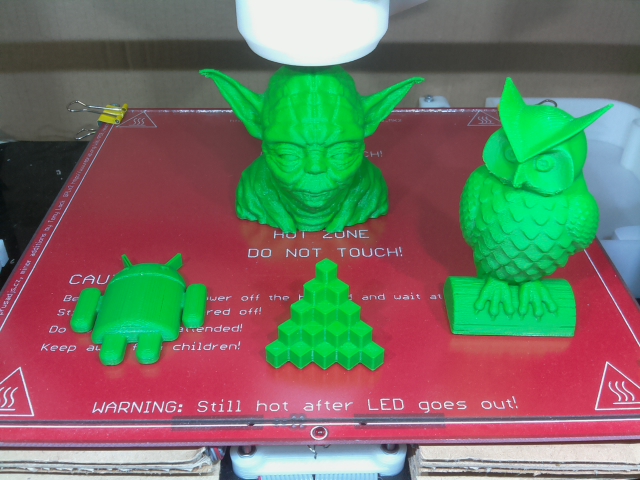 The bar can be clamped at any height. Lower gives a better view of the nozzle when it it close to the bed but tall objects soon go out of the field of view. Obviously a longer flat cable is needed to connect the camera to the RPI than the one supplied with it. They are readily available on eBay.

I also attached a 300 lumen LED light strip to the bar which gives enough light for the camera, even in a dark room. Having the light behind the camera avoids any glare from the glass. The particular strip I used is a SPS125 from Sanken Power Systems. I bought them several years ago and I don't think they are commonly available. However, the design is easily customisable by adding a new description to scad/vitamins/light_strips.scad. The clamps should then morph to suit.

The bar is printed in two unequal halves and the shorter one (red) slides into the longer one. The seam marks where the camera should be placed for alignment with the bed and the overlap length is such that both halves are the same height in total, so printing them together allows better cooling without needing excessive slowdown.

By default the RPI camera is focused at infinity and the lens is locked in place. It is possible to break the seal though and focus it very close indeed giving a microscopic view. For this application it only needs tweaking a little to focus at the middle of the bed. I designed a little focus wheel that can be glued onto the end of the lens carrier to make it easier to turn.

When I ran the camera with the default settings in OctoPrint it streamed data at about 16Mbits / second and used 40% of the RPI's CPU time. It worked fine printing from SD card but slowed down the comms when printing over USB. On a suggestion by Gina I added the usestills option to scripts/webcamDeamon, i.e.

That reduced the data rate to 3Mbps and the CPU load to 5%. It also had the side effect of vastly increasing the field of view. Here is a time-lapse captured by OctoPrint before I made the change. Notice the reduced field of view compared to the picture above.

Nothing on my WinXP machine would play the mpg files produced by OctoPrint, so I downloaded VLC Media Player. I found that is also able to record the OctoPrint video stream on the host PC. This video clip was recorded during the same build as the time-lapse above.


On another Mendel90 that I only use to print ABS parts, and hence don't fit the fan duct, I use a Logitech C270 USB webcam mounted in front of the machine, which gives a view like this: - 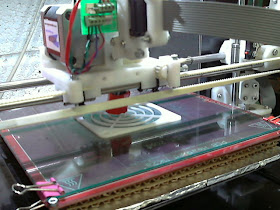 For this machine I mounted the same light strip just behind the gantry on brackets that hang over the top of the stays in the same way as the spool holders. 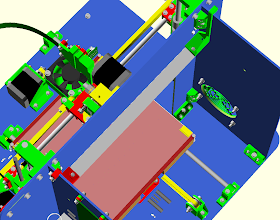 I prefer the  RPI camera at the back solution but it does have the disadvantage that it looks out into the room rather than at the wall behind the machine.

I power the RPI with the 5V standby rail of the ATX PSU and use one of the GPIO lines to turn the rest of the PSU on and off and another to turn the light on and off.

One thing I don't like about the RPI is the use of a micro USB connector for the power. A lot of micro USB leads have two much resistance to have enough voltage left at the RPI end. When you buy them there no indication of resistance but I managed to get some that where about 1.6Ω! To get around that I simply cut the wire off close to the plug and soldered to what was left.

The 5V volt supply comes from the purple wire of the ATX power supply. It looks blue on the photo below, but that is the camera lying! For a solid ground referenced to the logic on the Melzi I run a stout wire to the top terminal of the X limit switch. This ensures any voltage drop or noise in the ground wire between the PSU and the Melzi does not affect the USB comms and I find them rock solid in this configuration. 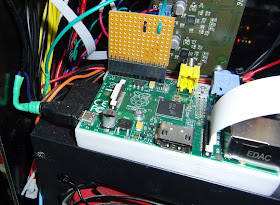 To make the vero circuit I started by cutting the tracks in a few places and drilling out some holes to provide strain relief for the flying leads. 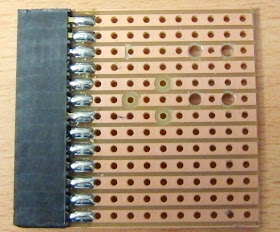 I wanted the board to mount vertically but I didn't have a right angle connector to hand. Since I only need a few pins from one row I surface mounted a through hole straight connector.

Here it is with the MOSFETs and wires added: - 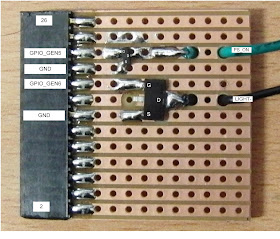 The small MOSFET is a 2N7002L and the larger one is a PHT8N06LT, but almost any logic drive N-channel enhancement mode MOSFETs should work. Neither gets fully turned on at 3V but both easily pass the current required, which is only milliamps for the PS_ON signal and about half an Amp for the lights.

On another machine I just soldered the MOSFETS to the connector and used heatshrink sleeving for strain relief for the flying leads on the drains. Much quicker but a bit fragile.

There are two ways to get OctoPrint onto a Raspberry Pi. You can start with a Raspbian image such as this one and then add OctoPrint by following these instructions or you can get an image for the RPI with OctoPrint already installed (called OctoPi) from here. The first method needs more steps and gets you the latest version. The second method is simpler but it takes me several hours to download, unzip and copy the image onto the SD card, so the first method can be quicker if you already have Raspbian installed.

When the RPI is booted you should be able to connect to it with SSH client like Putty or Tera Term. The default host name is octopi, username: pi, password: raspberry. If your DHCP server does not register the host name with DNS then you can find its IP address with a free application called Advanced IP Scanner found here. A good tutorial can be found here.

The first thing I do when connected is run :-

to expand the file system, set the time zone and change the host name, etc.

In order to be able to update the firmware I install the Arduino IDE and to run that I need a remote desktop so I installed TightVNC following the guide here. 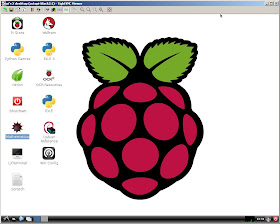 
I then get a copy of Marlin from Github with:

I then move the Melzi board support package to the Arduino IDE installation with: 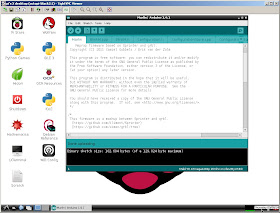 The Arduino IDE is a bit slow and clunky running on a RPI over VNC but it does work. A lighter weight alternative is a package called ino that can compile and download Arduino applications from the command line. It still needs the Arduino IDE installation but avoids the need for VNC.

Installation should be as simple as:


But that installs an out of date version that does not scan the hardware directory for additional board support packages, and so does not support Melzi. Instead I install it from source:

If make install complains python2 does not exist then do:

Ino expects the source code to be in a directory called src whereas the IDE puts it in a directory with the same name as the sketch. A simple workaround is to make a symbolic link in the directory above with:

(The other BSP packages have to be removed from the src directory because otherwise ino tries to build them and fails).

The firmware can then be built and downloaded with:

To control the RPI's GPIO pins I followed the instructions here: https://projects.drogon.net/raspberry-pi/wiringpi/download-and-install/. This boiled down to:

Then I extended the systems actions section of ~/.octoprint/config.yaml with the following:

After a reboot the printers PSU and the light can be turned on and off from the OctoPrint system menu. Obviously the light will only come on if the PSU is on.

I added a new Python script that makes the STL files and BOM files for a list of accessory assemblies: