The Mendel90 parametric design starts from the extruder dimensions and works outwards. I used a Wade's extruder for the Mendel sized version of the machine (I will need to sort out a smaller extruder for the Huxley sized version). My starting point was the Prusa version of Wade's. I tidied it up a bit aesthetically and made a few tweaks to the design and that had the side effect of making it easier for Skeinforge to slice correctly. The old version caused it to think layers were bridges erroneously. It now looks like this: - 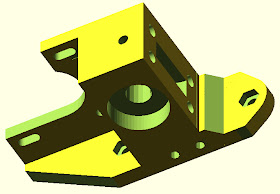 The functional things I tweaked were: - 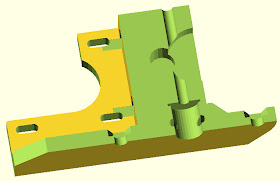 I use hobbed bolts and 10mm hot ends from  reprap-fab.org. Wolfgang makes the bolts so that the big gear can be spaced off from the bearing with 5 washers. That allows the small gear to be placed the right way round, allowing the big gear to be removed easily. M8 washers can vary in thickness so I made a printed spacer 7.5mm long to replace them.

I don't use Greg's accessible version of the extruder because I never remove the idler. Once I have got the spring tension correct I don't like to change it. If I need to clean the hobbed bolt I simply reverse out the filament, remove the nut and then remove the big gear and hobbed bolt. It only needs cleaning if there has been a malfunction due to a filament tangle or a nozzle blockage.

To make the nut easy to remove, rather than use lock nuts or a Nyloc, I use a single nut and a weak spring. The spring stops the nut vibrating loose and gives enough pressure to keep the bolt in the correct position but it can be removed without using a spanner.

The extruder is the only part of the machine that wears out, so I have made it easy to swap out by adding a 9 way D type connector. D connectors screw together and have good strain relief for the cable, so they are reliable when subjected to constant movement. They are also rated for 5A per pin and 125°C, which is a good margin for this application.

I attach the connector with a bracket that is screwed to the motor by removing two of the motor's screws and replacing them with screws that are 5mm longer. 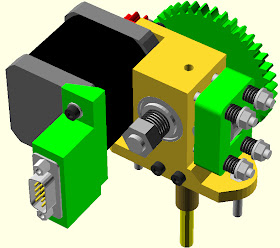 I have several extruders with difference nozzle sizes that I can change very quickly.
nophead at 22:26